Diversity in Science:
Jin-Si Over 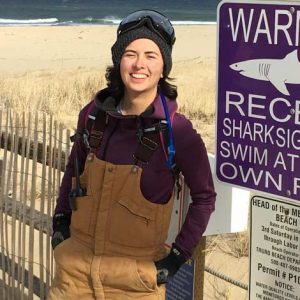 Jin-Si grew up in the Finger Lakes of New York fossil hunting in the creeks and playing in the woods. With the intent of becoming a marine biologist she moved to North Carolina for her undergraduate degree and almost immediately switched to the geology and oceanography program where she worked in the Sea Level Research Lab her first summer. The following summers after applying for multiple research experiences for students she was accepted into a summer program at Old Dominion University studying the effects of sea level and subsidence on coastal cities. Jin-Si was also selected for a NOAA Hollings scholarship and spent her last undergraduate summer in Hawaii studying the beach and the effects of natural and human drivers of sand movement.

After graduating with an honors thesis on microfossils in marshes preserving a west coast earthquake record she took 6 months to backpack around the world, visiting places like New Zealand, India, Greece, and Iceland. Upon her return, Jin-Si drove across the U.S to start her Masters on Vancouver Island, where she was the lab instructor for geological oceanography and geoscience field courses. When not hiking, paddle boarding, or volunteering in the invertebrate collections of the Royal B.C Museum she was working on a paleoclimate study using dinoflagellate cysts. Jin-Si then returned to the east coast to take a job in the National Park Service in collaboration with Rutgers University surveying the local beaches, making maps, and learning how to code in python. This experience propelled her to her current job on Cape Cod, where as a part of the U.S Geological Survey at Woods Hole in the Remote Sensing Coastal Change group she works with scientists across the country on natural disaster rapid response and analyzing the effects of hurricanes on coastal systems.
As an ideal teleworker, she spends a lot of time in her home office using geospatial software, but takes time to bake bread, unicycle, play Pokémon Go, and go to the beach.

Her advice to someone who is curious about a career in science? Try everything you can to find out what you enjoy and what you don’t. Science isn’t just crazy chemicals, petting dolphins, or hitting rocks. Speaking for the earth sciences – the field covers fossils, sand, soils, rocks, mud, minerals, climate, modeling, mapping, writing, art, education, land conservation, natural disasters, planets, lab work, computer work, field work and everything in between. You don’t even have to be good at math or have to get a PhD. And don’t let stereotypes define what you can and cannot be, I’m female, bi-racial, and queer – the sciences can only benefit from diversity. What is important is your passion, hard work, and your ability to be open to change.